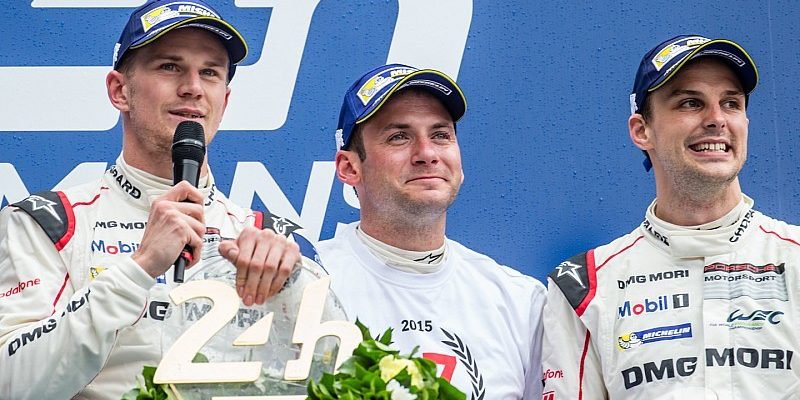 Nick Tandy and Earl Bamber joined F1 star Nico Hulkenberg to win Le Mans – but how did these relative unknowns get there in the first place?

The smile said it all – the big, beaming smile. At Daytona in February, I’d just asked Nick Tandy if he was going to be a Porsche 919 Hybrid LMP1 driver at Le Mans this year. And – once he’d stopped beaming – the words that came out of his mouth were the usual non-committal answer you’d expect from a driver who had been told to keep quiet about it.

Then that smile returned. Of course, I already knew the answer, and then he confessed, off the record natch, that the announcement should be coming very soon…

The driver line-up that won this year’s Le Mans 24 Hours – Nico Hulkenberg, Tandy and Earl Bamber – was categorised as Porsche’s ‘least-favoured’. That sounds harsh, but remember Le Mans counts for double points in the World Endurance Championship – so Porsche naturally wanted its regular championship cars to receive the big scores.

You could also imagine there might just have been an intra-team discussion about allowing the Mark Webber, Timo Bernhard and Brendon Hartley to move ahead in the closing hours…

There’s been a few of examples of the unfancied ‘third car’ taking the big prize – it reminds me very much of 1989, when Mercedes won its second-ever Le Mans with Jochen Mass, Manuel Reuter and Stanley Dickens. Again, it led a 1-2 for a German giant with an illustrious motorsport history. Again, a couple of handy relative-unknowns had backed up a superstar German F1 driver (albeit a retired one) to win.

While the focus was on Hulkenberg this time, winning on his Le Mans debut to become the first contemporary F1 driver to do so since Johnny Herbert and Bertrand Gachot in 1991, spare thought for Tandy and Bamber.

Like ‘The Hulk’, they’re both great guys as well as superb racing drivers.

From Ministox to Le Mans

Tandy’s route to the top has been a strange one. After a successful short oval career in Ministox, he was a star in British Formula Ford (winning the Festival just like Webber) before moving to Formula 3 – winning a race in Mygale at Rockingham against the might of Dallara domination, prompting emotional scenes as it happened just weeks after his brother Joe’s death in a car accident.

After Nick’s single-seater career fizzled out, he switched to one-make Porsche racing – battling for the premier F1-supporting Supercup title with Audi ace Rene Rast in 2010, winning it himself in 2011. From there he became a GT gun for hire, and was picked up by Porsche as a factory driver in 2013.