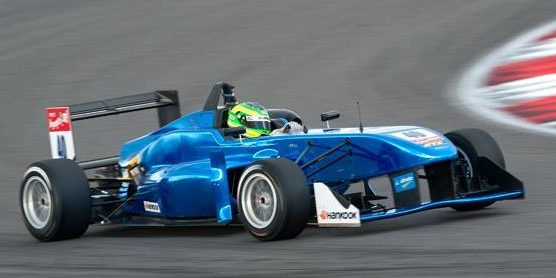 Formula 3 European Championship , which was held on Nurburgring , was test for “Artline Engineering”  and for  its bolid “ArtTech P315” .  The “ArtTech P315” finished all three races, Schlegelmilch being called into the pits during the second for a set-up change.
Schlegelmilch cut the gap from 1.2 seconds to the slowest “Dallara” in the first free practice period to 0.6s in the final qualifying session, to 0.3s in the last race. The team’s engineers found the main reason of speed lack.
The lack of pace was due to difficulty in getting tire temperature – the “ArtTech’s” testing has taken place at the Rustavi International Motorpark in Georgia, often in ambient conditions of over 40 degrees, while last weekend at the Nurburgring the temperature remained in the low teens for most of the weekend. Track temperature slumped from 25 degrees in practice and qualifying on Friday to 14 degrees for the final race, suggesting that Artline made strong progress in switching on its tires.
The car also showed strong straight-line speed, generally just 1km/h off the fastest overall, despite a lack of pace off the preceding medium-speed right-hander.
Artline’s engineer Egor Nazarov said it was a matter first of managing expectations.”If our expectation was to be in the top 10, we would be disappointed,” he told AUTOSPORT. “But if it is to try out the car, to understand it, then not.”
“Artline” is aware that it is playing a catch-up game against teams that have had the current generation of “Dallara” for almost four years. “Now we have to understand how the other teams work,” added Nazarov. “They have got their tires to working temperatures, but they have done a lot of work on modifying their cars.
The “ArtTech”, which ran with an NBE engine at Nurburgring, will be offered for sale with the capability to take any customer engine installation.
The second bolid was present in the team’s awning at the Nurburgring, and will be raced by an undisclosed driver in the Euro F3 finale at Hockenheim next month.
Share this post